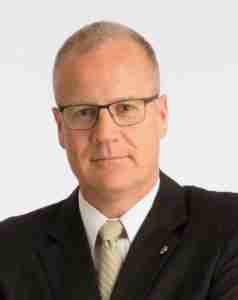 Author H. Jackson Brown wrote, “Live so that when your children think of fairness, caring, and integrity, they think of you.” Those attributes: caring, integrity, and fairness are words that friends and colleagues used to describe successful attorney, former marine, and family man, John Marti.

John graduated in 1981 from New Ulm High School. He spent his time there building relationships with friends and soaking up knowledge from his dedicated teachers. He wrote, “We learned from these relationships the skills, the faults, and the purpose that underlies our lives. Accomplishments ultimately mean little when set beside friendship.” John’s friendships grew through his involvement in football, track, golf, math team, student newspaper, and project SOAR.

After John’s successful high school career, he attended the Massachusetts Institute of Technology (MIT) on a Naval Reserve Officers Training Corps scholarship where he obtained a degree in chemical engineering. After graduation he served for three years as an infantry officer, completing the challenging U.S. Army Ranger School and U.S. Army Airborne Course. After serving as an infantry platoon commander, John was selected for the Marine Corps Funded Legal Education Program and attended the University of Oregon Law School on a full Marine Corps scholarship.

John has served as First Assistant U.S. Attorney in the District of Minnesota, was a trial attorney in the Fraud Section of the Criminal Division of the U.S. Department of Justice in Washington, D.C., and currently works at Dorsey Law Firm in Minneapolis. His contemporaries stated that he put his clients first and worked selflessly on their behalves. He refused to “succumb to outside influences if he believed it was contrary to his client’s interests of ethical standards.” The world of law is filled with oversized egos, but even with all of his accolades, John Marti remains humble and modest.

In addition to his professional duties, John is a member of the Board of Directors for Cornerhouse, a non-profit organization that assesses suspected child and vulnerable adult sexual and physical abuse, coordinates forensic interview and counseling services and provides training to other professionals. He also serves as a Mentor in the St. Thomas Law School Mentor Externship Program.

John, his wife, Elke, and his two children now reside in Eagan, Minnesota, although his children have “recently launched and are off the payroll”. This great man of fairness, caring, and integrity has come back to his stomping grounds. The people of Minnesota can be thankful to have this great leader in their midst for he will surely pave the way to a brilliant future.