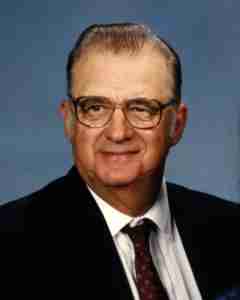 Gene Forstner was a leader. First born into a hardworking Sigel Township farm family in 1926, he was raised with the strong midwestern values that shaped how he lived his life.

Throughout his childhood and into his high school years, he worked on the family farm, was a member of the FFA, and played baseball. Gene graduated from District 88 in 1943. He enlisted in the US Navy during World War II where he served on the destroyer USS Charles P. Cecil as a radar operator from 1944-1946. Although he encountered terrible seasickness, he was tenacious and would not allow himself to be reassigned. After the war, Gene married Evie (Kral) and bought a farm from her mother, where they raised seven children (they lost an eighth at birth), and continued to farm crops and dairy for 45 years.

Gene began his years of community service on the ISD 75 School Board where he was instrumental in the redistricting of a number of small “country schools”. He was elected to the ISD 88 School Board to two separate terms and served several years as the board Chairman during his first term in the 1970s. Gene was well respected and a strong leader who spoke with wisdom, insight, and common sense. He was known to bring calm back to the group when discussion got too heated, often with a joke or light-hearted comment. Gene felt it was an honor to serve on the board and was known to ask, “What’s best for the kids?” He cared immensely about those kids, so much so that his last board meeting was the day before he passed away in 2001.

Baseball was one more of Gene’s great loves. He played as a child and into his 20s and managed the Searles amateur team, which he led to the state championship game in 1951. He was also a faithful fan, attending games where he watched his children and grandchildren play, or any good local ballgame. Gene filled his free time with service to the community. In addition to being a member of the District 88 school board for 20 years, Gene served on the Sigel Creamery and New Ulm Hospital boards. He also volunteered time as a member of the Farm City Hub Club and was a long-time usher at Cathedral of the Holy Trinity.

Gene was a family man of high integrity and a rock during times of turmoil. He worked selflessly to change the New Ulm area community and make it a better place for the kids. Today he is being honored as a member of the ISD 88 Hall of Fame, and we can answer not only Gene’s question: ‘What’s best for the kids?” but also ‘What’s best for the community?’ The answer was Gene Forstner.