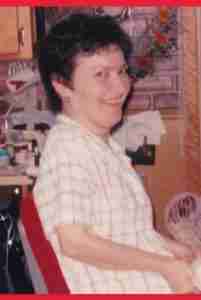 Faith Reinhart was determined, tenacious, and strong-willed. Diagnosed with polio when she was a young girl, Faith would be bound to her wheelchair for life. This happened in the 1950s, a time when the world was not accommodating to people who were unable to walk. Faith’s family and friends did not let this stop them from helping Faith have normal experiences. There were no ramps at school, so the football players would carry her up and down the stairs and out to her family’s car. There were no paved paths on her family’s vacation to Yellowstone, so her parents carried her over the rough terrain and rocks. These experiences served as fuel for her ambitions. Faith was determined to change the world for others like her.

During high school, Faith was involved in music, debate, and the school newspaper. She graduated in 1965 and enrolled in Mankato State University. Her mother drove her to her classes and lifted her out of the car in her wheelchair. While there, she earned her bachelor’s degree in vocational rehabilitation counseling. Following her time in Mankato, Faith attended Kansas State University, where she earned her Master’s degree in the same field.

After graduation, Faith chose to spend time in New Ulm giving back to the community. She was active in the Democratic party and served on boards at St. Mary’s School, Region 9 Advocacy, and the New Ulm Human Right’s Commission. She was a delegate to the Governor’s Commission for the Handicapped and participated in meetings in Washington, D.C. and the Caribbean.

Faith desired more independence so in 1974 she went to work at University of Reno where she counselled students with disabilities and pushed to install ramps on campus. Faith improved registration procedures and transportation for the disabled and had teletype communication devices installed for the deaf. While she lived in Reno, she had her own apartment and lived comfortably with the help of an aide.

After her work in Reno, the ever-tenacious Faith wanted more of a challenge, so she went to work in Albuquerque, New Mexico as the Director of the State Clients Assistance Project and on the State Board of Transportation. She was able to purchase her own house, got a driver’s license, and bought a van that was adapted to her needs. In 1989, a car broadsided her van and Faith sustained a broken back. She was unable to work and returned home.

Faith did not live a long life. She used her years on earth to make a great impact and fought to make positive changes for people. She saw a problem, and worked to fix it. May her life inspire us to do the same.