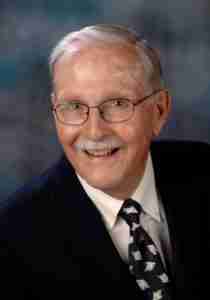 While in high school, John was a gifted athlete. He played four years of football including as a freshman on the 1949 South Central Conference Champion New Ulm football team. He also played basketball and he set the New Ulm High School records of points scored (775) and games played (65).

After graduation in 1953, John headed to the University of Minnesota. There he earned his degree in civil engineering and returned to New Ulm in 1958 to join his father in the family business – Heymann Construction Company. He became president of the company in 1968 and served in that capacity until his retirement. Under his direction, Heymann Construction built many of New Ulm’s commercial buildings. These include Washington Elementary School, Jefferson Elementary School, the New Ulm Senior High School, St. Anthony Grade School, the Martin Luther College Chapel, Library, and Dormitories, the New Ulm Senior Center, Oak Hills Living Center, Alliance Bank, the New Ulm Medical Center and many more.

John had the reputation of hiring and keeping the best of the construction managers and laborers in the community. He had the respect of those employees, many of whom started as young high school graduates and stayed until they retired.

John has been an active member and volunteer in the New Ulm community. He has served on the boards of the United Way, Chamber of Commerce, Alliance Bank, New Ulm Economic Development Corporation, South Central Technical Schools and the ISD 88 Advisory Committee. He was an active member of the New Ulm Rotary Club and was one of the original organizers of the Willkommen Committee, Industry of the Year, and the MLC Golf Tournament. He established the Conrad Frey Scholarship Fund at MLC and he is an active member of his church.

“[John] has been dedicated to serving his hometown proudly because he genuinely cares about making New Ulm a better place for his family, friends, and future generations to live. He is a generous man who has always been willing to contribute his time, talents, and treasure to achieve this goal.”

In more ways than one, New Ulm would look like a very different town if not for John Heymann.