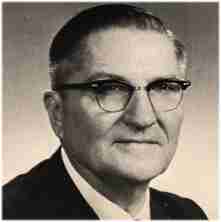 Every student that has gone through New Ulm Public Schools has felt the presence of Joe Harman. Whether you were a student of his, were on one of the teams he coached, played American Legion baseball, participated in Park and Recreation activities, or simply enjoyed time at Harman Park, you have been a part of his legacy.

After graduating from Gustavus Adolphus College, Joe Harman came to New Ulm in 1928 and was an employee of New Ulm Public Schools until his retirement in 1966. His list of accomplishments during that time is long. Joe coached football, basketball, baseball, and track. He is remembered as a tough, but fair coach that liked to win but also liked to have fun. He also taught almost every subject throughout the years, but ironically, never his college major, English. His guidance as a coach and a teacher helped mold generations of young people in New Ulm.

Joe Harman is considered the Father of New Ulm Parks and Recreation having initiated the program. He was its first director in 1936. Joe also used his own money to start a summer youth baseball program. In 1933 he initiated the American Legion team and was its first coach.

Joe was the Director for the City of New Ulm Civil Defense System and after retiring from the schools, Joe started a real-estate business, sang with the Concord Singers, and had a large rose garden from which he often delivered bouquets to civic offices and friends. If New Ulm ever had a Renaissance Man, Joe Harman was it!